Before Plan 9: Plans 1-8 From Outer Space is now available on Amazon!

I’m proud to announce that Before Plan 9: Plans 1-8 From Outer Space has been released and is available over on Amazon.  This book details those first plans where the aliens tried to prevent humanity from destroying the universe before their infamous raising of the dead experiment documented in the movie from Ed Wood Jr., Plan 9 From Outer Space.  Tony Schaab has brought together a bunch of fantastic authors to tell the tales that record our interactions with the alien beings who are fearful we will invent the substance that has the power to ignite the sun and destroy us all.  Certainly, their efforts with Plan 9 were a miserable failure, but what came before?  What attempts did they make in our past to try and curb our lust for violence and destruction?

Check out Before Plan 9, which includes my retelling of the Odyssey, aka Plan 1.  Just click on the book cover to be directed over to Amazon to get your copy today.  Oh, and make sure you keep watching the skies, because the aliens are sure to return! 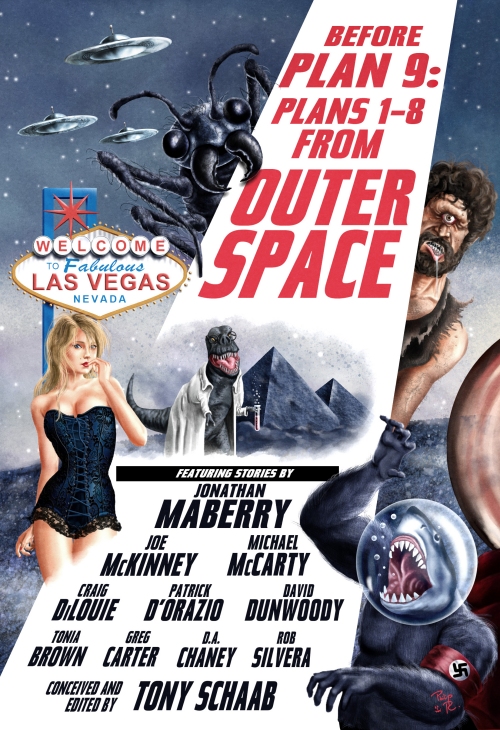 Here is the table of contents of this very fun and exciting new book:

Plan Zero from the Mesozoic Era by Tony Schaab
Plan 1 from the Lesser-Heralded Parts of The Odyssey by Patrick D’Orazio
Plan 2 from Ancient Egypt by D.A. Chaney
Plan 3 from the Middle Ages of Hamelin by Greg Carter
Plan 4 from the Clockwork Country by Tonia Brown
Plan 5 from the Depressing Depression by David Dunwoody
Plan 6 from the Nazi Regime by Rob Silvera
Plan 7 from Sin City by Jonathan Maberry
Plan 8 from the Fantastic Fifties, Phase 1 by Craig DiLouie
Plan 8 from the Fantastic Fifties, Phase 2 by Joe McKinney and Michael McCarty