Beyond the Dark now available in ebook format!

Permuted Press has released the final chapter in the Dark trilogy, Beyond The Dark, in ebook format.  Soon to be followed by audio book and paper formats, this completes the updated and revised version of the trilogy, with Dark Stories included-two of which even those folks who read all the Dark Stories I had to share in the previous electronic version have missed out on.  One of which is a story told in first person, called “A Soldier’s Lament” which is tied into the world of Jeff and company-with a couple of characters from the books showing up.  This particular story, which also appears in “Eyewitness Zombie” from May December Publications, an anthology of first person accounts of the apocalypse, is a bit different, and is definitely one I’m proud to have in this tome.  The other story was written specifically for this book, and tells the back story of Lydia, one of the key secondary characters introduced in Into The Dark.  In many ways, it is my favorite, because Lydia is a character who has grown to mean more to me in the past couple of years-she has elements of my late mother and sister in her, and she is a strong character who I love dearly.

And while everyone will assume something about the new cover of this third book…as in, the girl on it is a zombie, I will say this: don’t be so sure.  You’ll have to read the story to find out more.  😉

So please, check it out, and stay tuned for further updates for the paperback and audio formats of the book, coming soon.

Here is the press release from Permuted Press:

The 3rd and final book in Patrick D’Orazio‘s Dark Trilogy, BEYOND THE DARK, is out now in eBook!

“Grabs you by the ears and does not let go. We’ve heard the phrase save the best for last … well, that is exactly what happened with this trilogy.”
—Heather Headshot Faville, Doubleshot Reviews 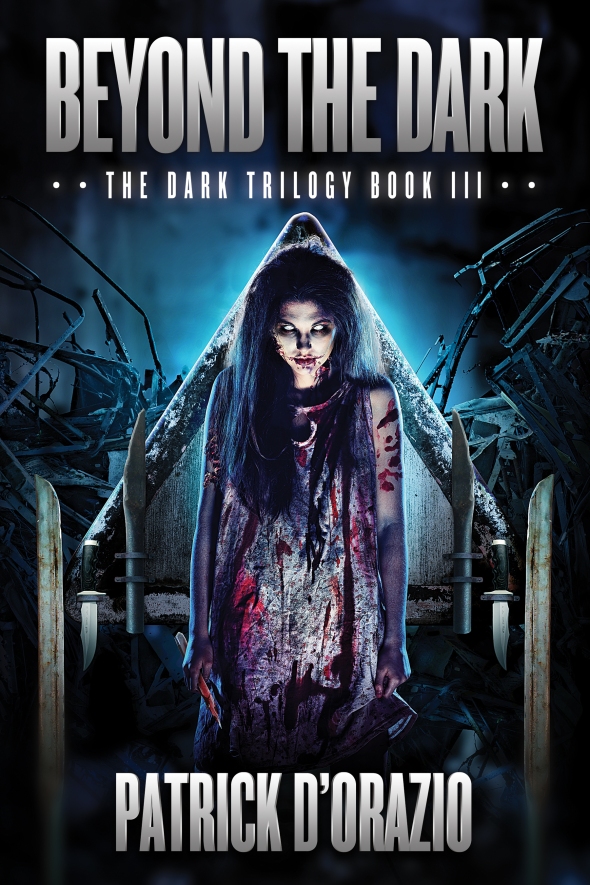 Review of Craig Jones’ “What Happened to Rhodri”

Rhodri is a young man living with his girlfriend, and they have dreams of getting married and moving into their “forever house,” an expensive home next to a lake that has come on the market. They can afford the down payment with the amount of money they’ve saved as well as the monthly payments, by Rhodri’s calculations. The house represents everything that the couple could ever hope for. Alas, Rhodri’s girlfriend has been suckered into ‘loaning’ the money to her no-good brother, who is an intimidating gangster. Rhodri is advised by her as well as his closest friend not to make waves and give up on the dream of owning the house, rather than messing with the thuggish brother that is likely to squash him into oblivion if he stands up to him. But at some point in life, you have to make a stand, and do what’s right, despite the odds being stacked against you.
Of course, as you can probably surmise, things don’t go well for Rhodri, and the bulk of this tale deals with things…after they take a horrible turn for the worse.
This short story is a mix of a creepy zombie scares and a classic revenge story. The pacing is solid and I really was able to empathize with Rhodri, rooting for him even as he turns into more of a monster than the enemy he is facing (at least more of a monster on the outside). The story was fun and reminded me of an old episode of Tales From the Crypt, with just the right amount of twists and turns and splashed with plenty of gory fun to boot. The ending caused an devious grin to spread across my face. It, like the rest of story, was eminently satisfying.

The Dark Trilogy is on Smashwords!

I am happy to announce that the single download of my entire trilogy, plus all the Dark Stories that I wrote which are associated with the trilogy, is now available for download from Smashwords.

Here is the full description:

Together in one massive tome, Patrick D’Orazio’s Dark Zombie Trilogy: Comes The Dark, Into The Dark, and Beyond The Dark are all contained in this release, along with a fourth book full of additional stories about many of the secondary characters that appear in the trilogy, including Megan, George, Jason, Michael, and Ben. The Dark Trilogy, Revised, Expanded, and with Additional Stories is well over 250,000 words of an intense saga of the zombie apocalypse.

The end came with a whimper, not a bang. The mysterious virus came out of nowhere and engulfed the world in a matter of days. Everyone who was infected seemed to die…and rise again. Governments collapsed, armies disappeared, and entire civilizations turned to dust as the human race tore itself to pieces. Jeff Blaine had a good life: a beautiful wife, adorable children, and a nice house in the suburbs. He liked his job, loved his family, and spent his lazy summer Sundays out on the deck, barbecuing with the neighbors. Things were perfect until everything fell apart. And no matter how hard Jeff tried, he could not spare his family from the horrors scratching at the door. Now, with his family gone, his life in ruins, the only thing left is raw anger and pain. As the world continues to sink into darkness, Jeff does as well. So he ventures out into the desolation with no better plan than to destroy as many of the monsters that stole his life away before they destroy him as well. But soon Jeff will discover other survivors unwilling to give up. They will force him to decide whether or not to give in to the venom that gnaws at his soul. Should he continue to fight to survive, or succumb to the things in the darkness?

So for those of you who haven’t checked my trilogy as of yet for your e-book reader or just want the story all in one place, this is a great value.  I think it would be about the equivalent of 800-850 pages in length in one paperback, and for $4.99, that is a great deal.

Just click on the cover below to be sent on over to the smashwords link!

Beyond the Dark is up on Smashwords!

The paperback version of Beyond The Dark, as well as the entire trilogy on Kindle and Smashwords, is coming soon, but the final book of my trilogy is up and running over on Smashwords now for $2.99!  So please check it out.

The proof has been ordered for the paperback, so as long as it looks good, that version will be up and available very soon.  I will keep everyone posted on it as details unfold.  The entire trilogy in ebook form will follow shortly thereafter, and details on that will also be forthcoming.

Until then, here is the description on Beyond The Dark.  Just click on the picture to be sent over to the link on Smashwords to pick up your copy now!

The dead have risen, and their hunger for the flesh of the living is insatiable …

It has been six weeks since the virus engulfed the world.  Everyone who was infected died, and then rose again.  Governments collapsed, armies fell, and civilizations turned to dust as the human race tore itself to pieces.

The living are in danger of becoming extinct …

Jeff Blaine has witnessed the annihilation of his family and everything that mattered to him.  When he steps outside his home for the first time since the world died, he meets Megan, George, and Jason, three other survivors who force him to accept that there may still be a reason to fight and live to see another day.

It doesn’t take long for the quartet to stumble into a trap set by a group led by the charismatic Michael.  While he promises a safe haven from the undead behind the walls of his makeshift fortress, the loyalty he and his cronies demand may be too high a price for Jeff and the others to pay.

Daylight is fading for humanity …

When a routine supply run to a nearby town turns deadly and the ghouls walking the street track the living back to their hideout, the mettle of the meager band of survivors will be tested as they are forced to face the onslaught of the undead.

Even as they flee, and their world falls deeper into despair, Jeff and the others must find a way to defeat not only the undead, but the hatred that threatens to cripple their souls.  Because the only way anyone will survive is if they can find their way beyond the dark.

April 13, 2011 | Categories: Beyond The Dark | Tags: Apocalypse, beyond the dark, horror, Library of the Living Dead, smashwords, writing, zombies | Leave a comment