HorrorHound Weekend and some notes on Beyond The Dark

Just wanted to post a note tonight since I haven’t posted anything for a bit except an update on the the book signing I did at That Book Place last weekend.  It was a great time with Beth LaFond and Benjamin Rogers, two good friends and fellow authors.  I am hoping to post a bit more here in the upcoming weeks, in particular with details on the release of Beyond The Dark, which has been delayed a little bit due to circumstances beyond my control.  It is pretty much ready to go, including the artwork I have already shared with you all previously for the cover.  I should know a bit more about the release this weekend, when I attend HorrorHound Indianapolis with my publisher, Mike West, aka, Dr. Pus.  He has been buried under with a lot of different projects so the release date on the book has been pushed back.  My hope is for an April release, though I have no fix on it.  The editing is complete, and all that really needs to be done is the formatting, so we are right on the edge of it.

Now, for HorrorHound.  This past November, I attended HorrorHound Cincinnati, which was a great event.  The aforementioned Dr. Pus, Benjamin Rogers, and Beth LaFond were all in attendance, as was Rich Dalzotto, who runs Horror Realm, another great convention that happens in Pittsburgh every September.  It was a great time.  Unfortunately, Ben and Beth won’t be coming to Indy, which saddens me greatly, but the good Dr. will be there, along with Rob Best, his lovely wife, Laura, Rich, and Mr. GORE Score himself, Tony Schaab.  Since this is the 10th Anniversary for HorrorHound, and Indy is their home turf, it should have quite a turnout.  They had over 10,000 people show up last year.

There will be plenty of horror notables there, and while I am not big on getting all the autographs and pictures, it is really cool to see folks walking around that you recognize from a movie or two that you think of quite fondly from your past.  And repeat after me: there is nothing wrong with totally geeking out at a convention!  Absolutely nothing!  So the fact that the guys from Boondock Saints being there makes me giddy is no big deal.

Here is a link for any of you curious about checking out the show if you think you can swing by Indianapolis this weekend.  http://www.horrorhoundweekend.com/ It should be well worth the trip.  I will, of course, be selling copies of my books and signing them, and will be chatting up my upcoming release of Beyond The Dark, which will serve as the finale for my trilogy.  Though…don’t be too sure that after that story is done that this will be the last we will see of the world I created with my Dark trilogy.  I have plans for more…

That leads me to a bit more info on what is going on with me these days.  As some of you may have guessed, I don’t really make my living off of writing (shocking, I know…har har) and I will be starting a new job immediately upon my return from HorrorHound.  I am excited about this opportunity, though I won’t bore any of you with the details.  I think one of the things I will be focusing on more of going forward (besides this new job, of course) is writing novels.  I have been dedicating myself to writing short stories during the release of my trilogy, and it has provided me with about twenty different acceptances over the past year plus, which has been great.  But as much as I love writing short stories, my novel writing has suffered a bit because of that.  Not that I can’t multi task, but I think with the trilogy behind me, I think the desire to get something out there that is a bigger chunk of text will be far greater.  That is my artful way of saying that I will be devoting most of my effort to writing novels for the foreseeable future.  There will be short stories, but not as many-only when the spirit moves me, rather than any submission call that challenges me, which is how I have been approaching it over the last year.  The reality is that most of my stories that have been accepted for publication haven’t been released yet anyway, so there will be plenty of them coming out over the next few months for me to promote here.  And I think that is what I will be blogging about mostly going forward.  Posting excerpts from some of my short stories to hopefully entice a few of you to check out the anthologies they are published in.  Anthologies with some really great writers that I am privileged to share the table of contents with.  I have been really proud of not only my work, but of the company I have been able to keep in this anthos.

I will be posting pictures from HorrorHound and doing a follow up on the show sometime next week, and then I will be doing my best to post something at least once a week here from now on…hopefully some new writing for all of you to check out.

Again, check out the HorrorHound page and I hope to see you at the show!

Commercial for Library of the Living Dead!

Check out the commercial for Library of the Living Dead Press that was shot at Horror Realm last month.  A lot of folks were involved with this and I had the privilege of being one of the zombies in the commercial.  It was a blast!  I’m the guy with the bloody face, by the way.  Wait…everyone had a bloody face, heh.  I’m the guy with the red shirt, if that helps.  Well, it doesn’t matter if you can’t find me in the crowd, because we’re zombies-we’re sorta supposed to be hard to tell apart.

Enjoy watching the video.  I know I enjoyed being a part of the making of it.

My interview on Blog Talk Radio

My interview with Sonar 4 tonight, for those who didn’t get the chance to check it out live.

Lori Titus and Tonia Brown did a great job and it was a lot of fun talking about Comes The Dark, some of my short stories, and the absolutely horrendous book I wrote back in high school that remains locked away forever.

Looking back at Horror Realm 2010

This past weekend, I got to go to my very first horror convention, Horror Realm, which is held in Pittsburgh.  This is a zombie-centric horror conference and gave me and the rest of the authors from The Library of the Living Dead and Permuted Press the chance to meet with horror fans of all stripes, discuss zombies, and have a blast.

Things got going on Thursday night, when those of us who had the chance to come in a bit early were able to head to Rich Dalzotto’s house and mix and mingle with one another.  Rich is one of the folks who runs Horror Realm.  The party gave me the opportunity to meet and interact with quite a few of the folks I haven’t met face to face before but have corresponded with and spoke to on Skype.  Too many to mention here, and I fear that if I start naming names, I will end up skipping someone.  So suffice it to say, the party was a lot of fun and a great experience.

Putting up my books and being at the actual show was quite an experience.  I have gone to conferences for work before, but never something like this.  There were a ton of vendors and quite a few horror celebrities, with reunions for Night of the Living Dead and Dawn of the Dead happening at the convention.  Even with these celebrities walking around, I gained the most enjoyment in having the chance to get to know a lot of other authors over the three days of the show.  Doc, my publisher, was terrific, and so was Jacob Kier, who is the publisher over at Permuted Press.  They both took great care of everyone and despite the fact that sales weren’t huge, the show was a rousing success.

One of the highlights for me was getting made up as a zombie to film a commercial for The Library of the Living Dead.  All us zombies got to tear into Doc, though it wasn’t blood and guts that came out, but something else entirely.  I won’t ruin the surprise, but lets just say we all had a blast filming the commercial.

I wanted post a few pictures I took at Horror Realm here as well, just to provide a flavor of the event and the people I had the pleasure of meeting up with.  I am already anxious to go to next year’s event, because if it is half as much fun as this Horror Realm was, it will be well worth the trip! 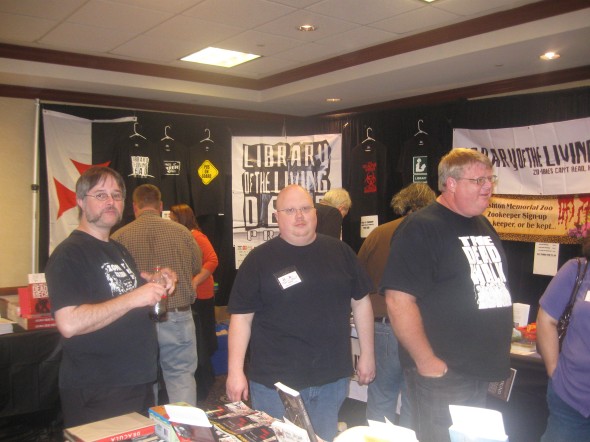 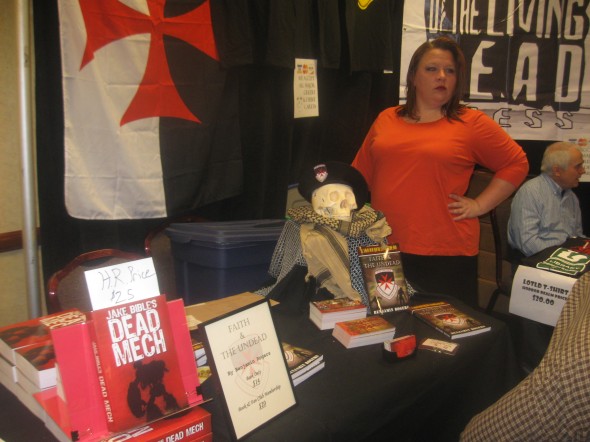 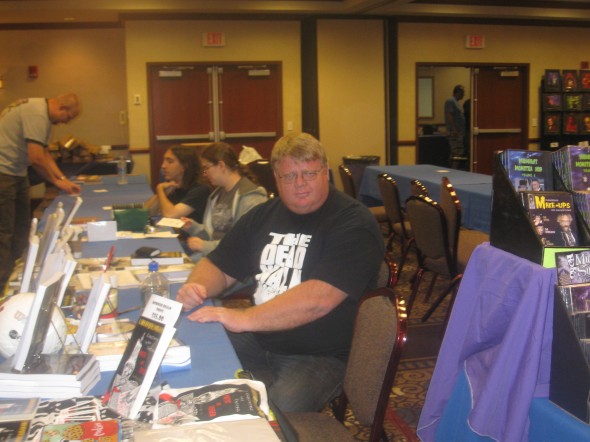 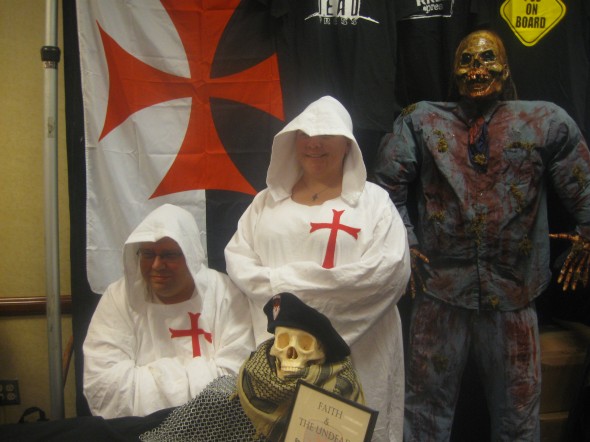 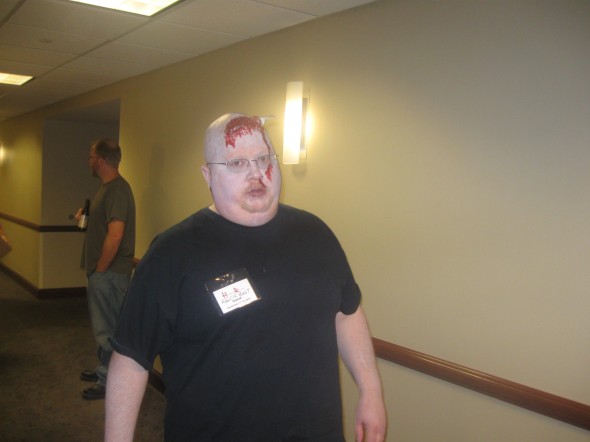 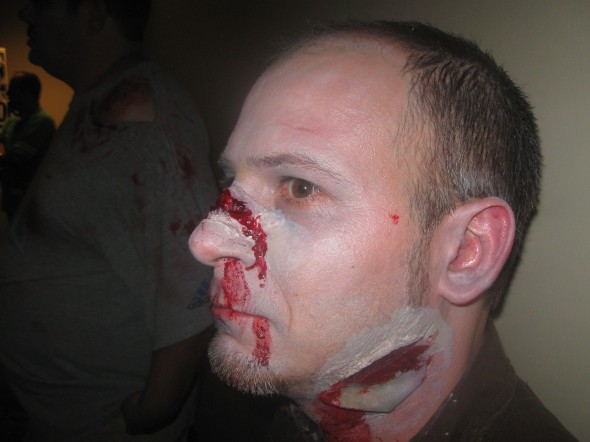