Yep, I did it again.  I’ve returned to the bizarro world with my offering to the folks over at Rooster Republic Press…which is their new name.  It’s their new name, because they had a different name when I was in Tall Tales with Short Cocks Volume 2, not so very long ago.  But I’m happy they accepted my humble little tale about family dysfunction  “Hell in the Family” that appears in Tall Tales with Short Cocks Volume 3, regardless of their name.  It should be available for mass consumption on February 26th, right around the time Comes The Dark reveals itself in paperback and in audio book format.  So it is a great double whammy for me.

I’m looking forward to being apart of another wild and raunchy compendium of screwed up stories about screwed up things.  While I can’t speak to what the other authors have contributed and what strange topics they have dived into, my story is my own take on the ever popular nerdy vampire sub genre.  Well, just because you haven’t heard of this sub genre doesn’t mean it isn’t popular.  Well, it might still be a bit of an underground revolution in the making, but I swear it’s gonna be huge someday!

So I’ll be sure to add links once the book is available for purchase, but for now, feast your eyes on the very shiny, purty cover of this latest edition of Tall Tales with Short Cocks. 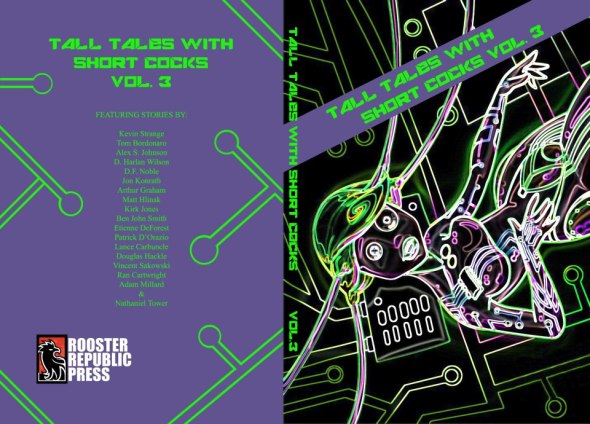 This entry was posted on February 18, 2013 by patrickdorazio. It was filed under My Writing Experiences, Other folk's stuff..., The Shorts and was tagged with Bizarro, comedy, ghosts, horror, Rooster Republic Press, vampires.