“Live and Let Undead” is available on Amazon!

Live and Let Undead, an anthology with my tale “Legacy,” has been released and is now available over on Amazon.  Just click the cover image and you’ll be heading over there so you can check it out for yourself. 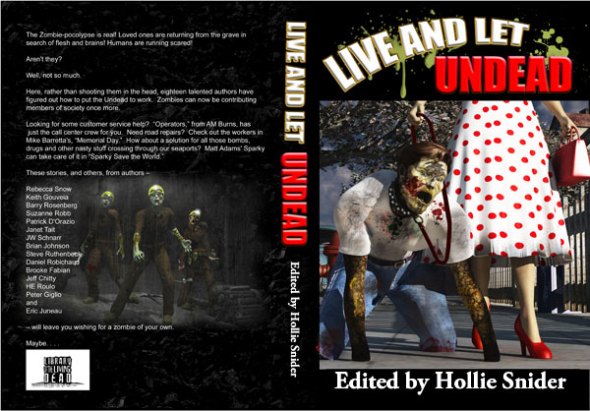 I am really excited about this anthology.  The story I wrote was truly inspired, and I wrote the first draft faster than any other story I’ve written.  I loved the concept of this anthology: the idea of zombies not being the enemy, but being our domestic servants, much like you’ll find in the movie Fido.  Of course, I suspect there were a lot of different takes on this particular concept.  My story is certainly not what you might expect, or at least I hope not!

I think that any true zombie fan will love this one, and should give it a shot.  Check out the description from the back cover, including the list of authors who contributed to this collection.  I’m sure you’ll recognize a name or two on the list…or several.

The Zombie-pocalypse is real!  Loved ones are returning from the grave in search of flesh and brains!  Humans are running scared!

Here, rather than shooting them in the head, eighteen talented authors have figured out how to put the Undead to work.  Zombies can now be contributing members to society once more.

Looking for some customer service help?  ”Operators” from AM Burns, has just the call center crew for you.  Need road repairs?  Check out the workers in Mike Baretta’s “Memorial Day.”  How about a solution for all those bombs, drugs, and other nasty stuff crossing through our seaports?  Matt Adams’ Sparky can take care of it in “Sparky Save The World.”

These stories, and others, from authors-

-will have you wishing for a zombie of your own.

This entry was posted on January 4, 2012 by patrickdorazio. It was filed under Other folk's stuff..., The Shorts and was tagged with Apocalypse, comedy, cover art, horror, Library of the Living Dead, short stories, zombies.