Beyond the Dark is up on Smashwords!

The paperback version of Beyond The Dark, as well as the entire trilogy on Kindle and Smashwords, is coming soon, but the final book of my trilogy is up and running over on Smashwords now for $2.99!  So please check it out.

The proof has been ordered for the paperback, so as long as it looks good, that version will be up and available very soon.  I will keep everyone posted on it as details unfold.  The entire trilogy in ebook form will follow shortly thereafter, and details on that will also be forthcoming.

Until then, here is the description on Beyond The Dark.  Just click on the picture to be sent over to the link on Smashwords to pick up your copy now!

The dead have risen, and their hunger for the flesh of the living is insatiable …

It has been six weeks since the virus engulfed the world.  Everyone who was infected died, and then rose again.  Governments collapsed, armies fell, and civilizations turned to dust as the human race tore itself to pieces.

The living are in danger of becoming extinct …

Jeff Blaine has witnessed the annihilation of his family and everything that mattered to him.  When he steps outside his home for the first time since the world died, he meets Megan, George, and Jason, three other survivors who force him to accept that there may still be a reason to fight and live to see another day.

It doesn’t take long for the quartet to stumble into a trap set by a group led by the charismatic Michael.  While he promises a safe haven from the undead behind the walls of his makeshift fortress, the loyalty he and his cronies demand may be too high a price for Jeff and the others to pay.

Daylight is fading for humanity …

When a routine supply run to a nearby town turns deadly and the ghouls walking the street track the living back to their hideout, the mettle of the meager band of survivors will be tested as they are forced to face the onslaught of the undead.

Even as they flee, and their world falls deeper into despair, Jeff and the others must find a way to defeat not only the undead, but the hatred that threatens to cripple their souls.  Because the only way anyone will survive is if they can find their way beyond the dark. 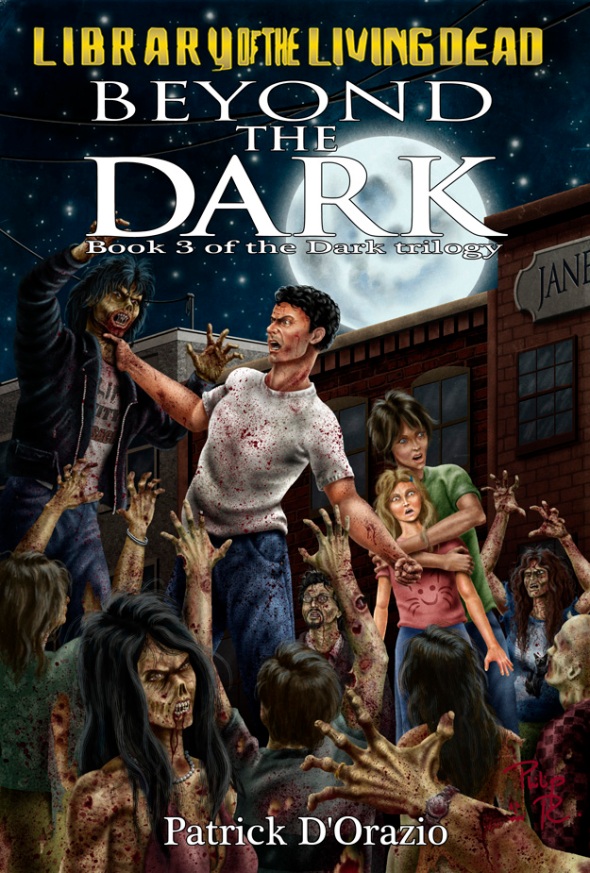 This entry was posted on April 13, 2011 by patrickdorazio. It was filed under Beyond The Dark and was tagged with Apocalypse, beyond the dark, horror, Library of the Living Dead, smashwords, writing, zombies.