I spent this last weekend with several good friends over at HorrorHound, promoting my book: Comes The Dark and the soon to be released sequel, Into The Dark.  It was fun mingling with a wide cross-section of horror fans, chat about my books, and have the chance to spend time with Ben Rogers, author of Faith And The Undead, Beth LaFond, Publicist for The Library of the Living Dead, Rich Dalzatto, who runs Horror Realm up in Pittsburgh, and Dr. Pus, aka Mike West, who owns The Library of the Living Dead.  I helped my fellow table dwellers sell some of their books and they did the same for me, and we had a good chance to hang out together not only at the show, but at Coco Key’s water park on Saturday night, which is attached to the hotel where the convention took place.  I was able to bring my wife and kids along to that event and we had a blast.

I also had the privilege of being interviewed for two podcasts while at the show-stay tuned for links as they are passed long to me.  It is always fun to promote my stories and the folks at Night of the Living Podcast and The Creepture Feature Horror Show were great to talk with.

I didn’t take a lot of pictures at the show, but suffice it to say, the crowds were great and things were hopping.  I sold a pretty good amount of my books and even met some folks who had already purchased it and had some great conversations with them.   Here a few pictures I took when my wife and kids showed up on Saturday.

From left to right: Rich Dalzatto, Dr. Pus, my son Zack, me, my daughter Ali, and Ben Rogers…and Zeb, the zombie that lives in the shed out behind Ben’s house 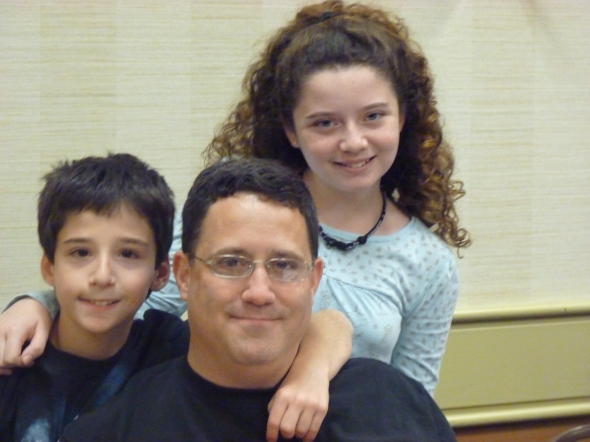 Me and the kids at my table

This entry was posted on November 16, 2010 by patrickdorazio. It was filed under Comes The Dark, Into The Dark, My Writing Experiences, Other folk's stuff..., Random Thoughts and was tagged with comes the dark, convention, horror, HorrorHound, Into The Dark, Library of the Living Dead, zombies.